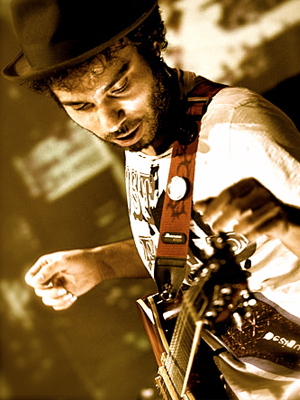 Bilal got the Jazz Performance bachelor degree from Istanbul Bilgi University (2000-2004) and had chance to study with the greats such as Lawrence Butch Morris, Ricky Ford, Donovan Mixon and Aydin Esen. His musical studies not only including Jazz but also Turkish Music as well. In 2009 he won a Jazz Guitar competition in Istanbul/Turkey, sponsored by Yamaha and awarded the first prize. Released two albums: Bahane / BBS Music 2011. Patika / Bayku? Music 2013. Not only a performer, but also as an instructor he founded the first virtual guitar academy in Turkey, named “Gitar Akademisi”. Besides his solo carrier, he has given concerts and collaborated with numerous artists in many different concerts/albums, to name a few: Marcus Miller, Dianne Reeves, Butch Morris, Ricky Ford, Harvie S, Lars Danielsson, Mike Moreno, Gustav Lundgren, and many more.. Along side his musical knowledge and technique, thanks to the interest in different music styles, he has developed a unique style. And he shortly explains his music in one sentence: 'A unique near east approach to jazz guitar' Young guitar virtuoso still lives in Istanbul, and continue his artistic works to spread out the Turk Jazz.