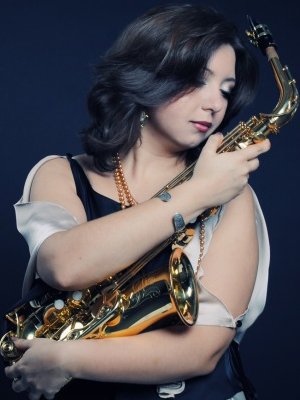 Education:bio * Ekaterina began her musical journey at the age of 5. Initially, she started playing piano, and later added guitar, clarinet, and saxophone at the Music School for Children, located in a Moscow region known as Serpukhov. While in school, she performed in various city festivals, regional competitions, and concerts. She was also a member of numerous educational and town municipal wind bands.* At 16, Ekaterina graduated from the Public School of Mathematics and, afterwards, joined the Moscow Jazz Studio «C-Jam Club». In addition to receiving academic honors at this prestigious high school, she was also awarded high honors in music, 6 years laters, at a state establishment of professional education in Moscow known as “The College of Arts.”* In 2007, she received her Bachelors degree and, in 2009, her Masters degree from the Technical University, where she majored in Robotics Technology.* She is continuously inspired by jazz giants like Charlie Parker and Cannonball Adderley, Stan Getz, Michael Brecker, and Eric Marienthal.Professional Experience:* She has lectured and provided private instruction to teenagers and adults of all ages, for about 6 years, through The Youth Cultural Establishment Centre “C-JAM CLUB.” During this time, she inspired many students to broaden their musical horizons and strive to achieve a new level of playing and understanding of music.* Performed as the first alto and soprano saxophonist in the Moscow Jazz Big Band “C-Jam Club Jazz Orchestra” for approximately 8 years.* Member of the following Moscow and International Festivals: - Musicfest– International Festival of Vladimir Spivakov– Winner of the International Competition “Diamonds of Russia”– 2007, 2008 and 2009 winner at the music festival known as “Festos”– Multiple winner at the International Jazz Festival “Dzhaliton” in Yalta, Uraine and three-time winner of the Audience Choice Award.* Her repertoire includes Swing, Funk, and Latin from the best modern arrangers for Jazz orchestra, as well as her own original compositions. Her work has addressed a wide range of audiences – from fans to jazz connoisseurs.