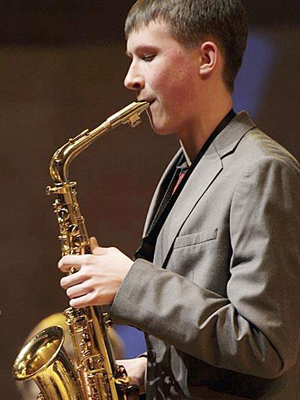 Ilya is engaged in music from 8 years. Began to play on saxophone at 11 years, did tranion and improvisations. He graduated from children's music school of jazz by Kim Nazaretov, and Rostov College of Arts (all with honours), and is now studying at the Conservatory. He can play all kinds of saxophone (alto, tenor, soprano, baritone) and piano and flute. Plays both jazz and classical music.
He is a prize-winner of all-Russian and international jazz and classical competitions.
At the VIII international competition for young jazz performers of Rostov-on-Don he was awarded with the special prize of the Government of the Rostov region, as "the most promising young musician". Chairman of the jury Igor Butman summing up the competition, noted that "he has fantastic talent and has a great future."
In February 2013 he opened XIII International Festival "Triumph of Jazz" in Moscow, where participated worldwide jazz stars: Dave Grusin, Lee Ritenour, Bill Charlap, Roy Haynes, Igor Butman. \r\nHas a great practice game in various musical groups, ensembles and Big Bands, mostly as a 1-st Alto.
Favorite music finds- jazz, mostly post-bop.


Ilya Ageev (saxophone, Russia)
He can play all kinds of saxophone (alto, tenor, soprano, baritone) and piano and flute. Plays both jazz and classical music.