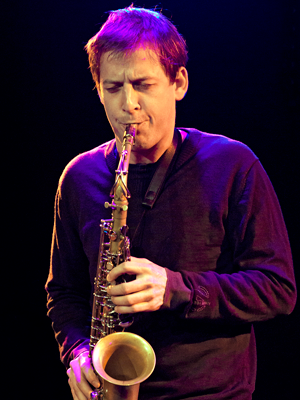 Malte Durrschnabel (as,ss,fl,cl)
Malte Durrschabel studied Saxophone at Berlin University of the Arts and at the Royal Conservatories of The Hague and Brussels. He's now a freelance musician and music teacher. As a guestprofessor he worked for the PUJ-University in Colombia and he was awarded with the prize for the best instrumentalist at the international Jazzcompetition «Tremplin Jazz de Avignon». As a lead alto player he worked for the WDR Big Band Cologne, the Glenn Miller Orchestra and for the German National Youth Jazzorchestra (BuJazzo). Besides numerous engagements as a sideman he frequently performs with the Group «Subtone»; and is a permanent member of «The World Famous Glenn Miller Orchestra».
Furthermore he had the honour to share the stage with musicians such as Al Porcino, Lalo Schifrin, Bennny Golson, Ack van Rooyen, Theo Bleckmann, WDR BigBand, HR BigBand etc. and he performed in more than 20 countries on 5 continents. He plays on various records: «High Tide» (doublemoon) and «Echolot» (skiprecords), Morningside (Enja) Jazzattack «Hausgemacht» (Mons records), BuJazzo «Calling South Africa» (Mons records) etc.
Broadcasting Productions for WDR, BR, NDR, SWR, RBB and DLF.