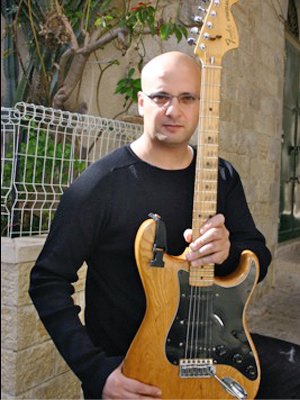 Guitarist and composer Michel Sajrawy was born to a Palestinian family from Nazareth - Israel. At the age of nine he started taking guitar lessons. During the years 1990-93 he studied for and received a diploma in electronic engineering. In 1995 he moved to London, England, where he studied and completed a one-year diploma at the Musicians' Institute - G.I.T. He began a three-year degree program in music composition at The London College of Music in 1996 under the instruction and assistance of Adam Gorb. During the years 1999-2000 Michel furthered himself with the assistance of Adam Gorb and Nigel Clark to complete his masters degree in film and TV scoring. In 2000 he returned to Nazareth and established his own business Dasam Studio (Dasam is a word in Arabic for “rich food”). As a band leader, he released his debut album Yathrib (Ozella Music 2006) which marked his entrance into the vanguard of crossover artists who see themselves creating an uncompromising jazz sound between traditional and contemporary. In 2009 he released his second album, Writings On The Wall (Ozella Music) which marked a strong turning towards filigree west-eastern acoustic jazz. Among the jazz releases, the album became on the Top List "Best albums of 2009" of Freies Radio Stuttgart in Germany. In 2012 he released Arabop (Ozella Music / Dasam Studio). Michel can easily join the ranks of seminal jazz guitarists. With his band, he played in different parts of the country, toured in Germany and played the Leipzig Jazz Festival (2006), played in Switzerland-Geneva (2007), Jerusalem Festival (2007), where he met and jammed with Nigel Kennedy. He played in the Netherlands (2008), the same year he played in New York (USA). Played the Jordan Festival (2009) and Tel Aviv Jazz Festival (2009). He played the International Oud Festival in Jerusalem (2012). He worked with Abboud Abdel 'All, Bashir Abdel'All, Ahmed Mukhtar, Samir Jubran and Manfred Leuchter. He composed music for several documentary films, arranged the music for theatre, various mini orchestral projects and produced radio jingles for the major brands in the country. Michel has been awarded the Wilfred Joseph Prize (1998-99 England), Best Title in Music (2002 Israel) and the A. M. Qattan Foundation's Performing Arts Grant for the year (2007 Palestine).