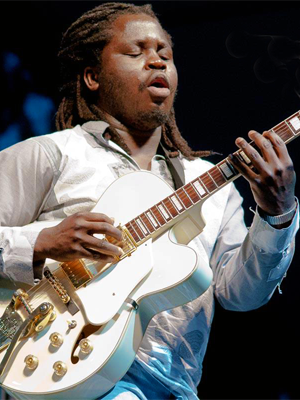 Adedeji is a prolific singer, guitarist and composer, who was born and raised in one of the largest cities of West Africa, the vibrant and funky city of Lagos. A career in Music wouldn't have been a choice for him, as survival is usually meant to be the priority of most people Up there. However, music found its way to his heart at the early age of 5 before he joined the church choir. By the age of 10 he was already leading the choir through classical pieces and beyond, even though not classically trained. Adedeji's first music teacher was himself. He learnt to read music notation and played a bit of clarinet during this same period, he was all around as a session musician doing backing vocals and also producing local artist in Nigeria. At the age of 18, his voice was all over Nigerian radio jingles, adverts and movie sound tracks. He arranged and composed songs for Salvador Sango, when he was the lead singer/rhythm guitarist before leaving the band. In 2005 his compositions were featured on the band’s debut album.

He had 2 years of music technology study at the polytechnic Ibadan before moving to the university of Lagos to study creative art for few semesters. During this period he picked up the guitar initially out of the need to learn chords for compositional reasons, and he got his friend to show him just two chords and that was it. He immensely socked himself in the masterful art of George Benson and Wes Montgomery, Charlie Parker, King Sunny Ade, Fela Kuti and his list of favorites grew so fast in a short time. The year 2006 Adedeji travelled to Greece to perform at the world music day and after his return to Nigeria, he relocated a year after to Greece where he spent time performing almost every night, doubling as a singer and guitarist as well as recording artist. He took music courses at the London college of music where he has degrees in performance and at Prince Claus conservatory Netherlands where he studied jazz Guitar/Vocals. After moving to the Netherlands he has since shared stage with artist like Hind, Ruben Hein and was recently awarded the Talent award 2012 VNO NCW NOORD TALENT AWARD. And performed with the prestigious NNO orchestra. Some of his musical accolades includes performing and sharing stage with Lionel Loueke, Jd Walter, Femi Temowo, Gene Jackson, Lagbaja, Ayo Bankole, Steve Rhodes Orchestra, Salvador Shango and many more. He featured on Mc Yinka's Alana album, Yannis Kassetas Funk abyss album, Elvis E's prayer Album and has performed in Festivals and Concerts like, Apollo Theatre (Greece), World music day 2006/2009 (Greece), Documentary Festival (Thessaloniki, Greece), African Art Fest (Madrid), Sing Out Gospel Concerts (Germany), Gideon Festival (Netherlands), Swinging in Groningen, Kalamata Jazz Festival. Amsterdam Gospel Festival, Stukafest (Groningen Netherlands), Enclave de Agua Festival Soria Spain. To name a few. His debut album Ajo has received good reviews and air play all over the world Adedeji's sic is an infusion of Traditional African style with progressive attitude and modern sound of jazz and funk music, creating a music that is rhythmically and technically broad , harmonically rich, melodically and emotionally compelling. It was recorded in 5 countries - Nigeria, Greece, Spain, France, Netherlands and features some of the best players around the world including The Award winning jazz guitarist Lionel Loueke.