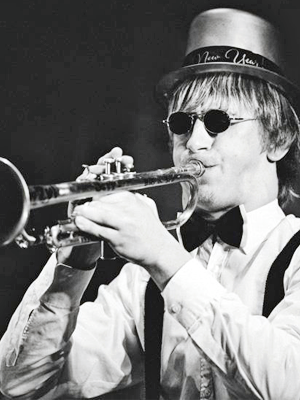 Andrey Zyl is a jazz trumpeter, sideman, improvisator, arranger. He is a leader and founder of the big band ‘Big JazZyl Band’. The student of Gnessin State Musical College (Moscow, Russia).
Andrey is the winner of the first prize on the International Jazz Competition of talented young musicians named after Kim Nazaretov, the best trumpeter-improviser of the contest Panevezys, Lithuania, 2012. The finalist of “Master-Jam Fest - 2013”.
He performs at the stages of CIS and Europe.
He was honored to perform with such remarkable musicians as Al Jarreau, Kevin Mahogany, Yvonne Sanchez, Kelvin Sholar, Fuasi Abdul-Khaliq, Gabrielle Stravelli, Erez Barnoy, Igor Butman, Valery Shchedritsa, Nikolay Levinovsky, Adam Teratsuyan, Eduard Zizak, Alexander Kantsberg and others.
Andrey Zyl: “I always try to not to be just a trumpeter but a musician. I try to speak the language of the musical instrument.”.


Andrey Zyl (trumpet, Byelorussia)
“I try to speak the language of the musical instrument.”