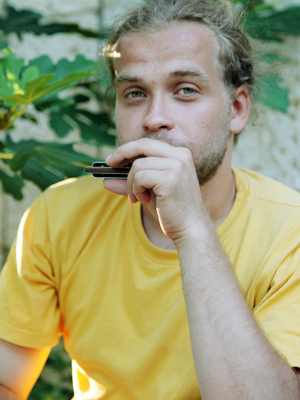 Boris Plotnikov is a Russian musician and teacher of harmonica. The soloist of the jazz big band of the musical college named after Chaykovskiy under conduction of V. Vladimirov, gives recitals, plays as side-musician with different authors and performers (singers song-writers) such as Andrey Kozlovskiy, Pavel Fahrtdinov, Umka (Anna Gerasimova).
He constantly participates in the Moscow festival of harmonica (2003, 2007-2009), took part in Yekaterinburg accompanied band of American blues singer and guitarist LarryHoward.

Besides performing, he teaches actively. In 2009 the class of harmonica was open at the mainstream department of Sverdlovsk musical college named after P. I. Tchaikovsky. For today this class is the only one in Russia (in state educational establishment), the first alumnus will get the diploma of state standard acknowledging receipt of the middle special education “Mainstream orchestra performer (harmonica)”.

Boris conducted master-classes in educational summer camp Harpsummer-2011 in Bulgaria, and visited the Netherlands with series of master-classes and performances by invitation of Viola Barends harp (harmonica) school (violaharmonica.com). In 2012 he took part in the jury and performed at the Baltic -Nordic Harmonica Festival 2012 (Estonia).

He’s got four high education diplomas: master of biology, graduated from the biological faculty of Ural state university named after A. M. Gorkiy and aspirancy of the ecology of plants and animals Institute of Ural department of Science Academy.

“Besides harmonica I like singing songs with the guitar accompaniment. I am interested in news of science and global problems of the civilization”,- says Boris Plotnikov.

http://borisplotnikov.ru
Твитнуть
Нравится
Boris Plotnikov (harmonica, Russia)
Teaches in the first and only one harmonica class in Russia at mainstream department of Sverdlovsk musical college named after P. I. Tchaikovsky.