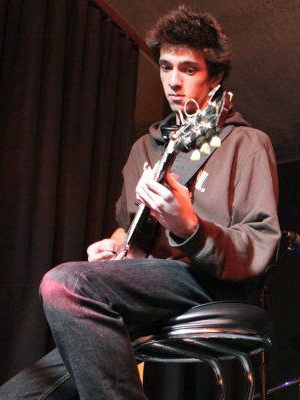 “I started playing the guitar at my 11. Since early age I became interested in rock music and blues guitar. Later influenced by the teacher Vladimir G. Voshkolupa I got interested in jazz and entered into the Kiev Musical Institute named after Gliyer in 2008, where I seriously engaged jazz guitar. I was taught by Vladimir Shabaltas. In the college I got a lot of experience from some of the best Ukrainian musicians, participating in various projects. I was also the leader of several groups and wrote author music for them.
In 2011 I won the first prize in the nomination “Jazz guitar” at the guitarists contest “April branches” named after Molotkov. From December 2011 to September 2012 I participated in the “Kiev Big Band” jazz orchestra.
Currently I study at the jazz department of the University of Art in Graz (Austria) .”

View full version on Youtube channel
Danil Zverhanovsky (guitar, Ukraine)
“In 2011 I won the first prize in the nomination “Jazz guitar” at the guitarists contest “April branches” named after Molotkov.”