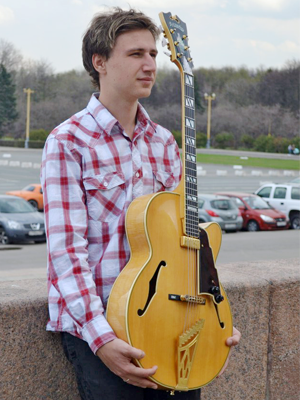 Ilya Zyrianov is a young jazz-musician, the New Guitar School representative. He’s the prize-winner of the contests and the participant of the international jazz fests. He has appeared on stage and recorded together with famous musicians of Moscow and St. Petersburg. Ilya Zyrianov's quartet represents a fusion of jazz, Latin American music and rock music. The band performs both author's music, and well-known jazz compositions, cooperates with the prominent St. Petersburg jazzmen – Maxim Nekrasov, Nikolay Sizov, Olga Ponomareva, Sergey Nagornym.
The talent of the young musician was estimated at the following events:
- "The VIII International Competition of Young Jazz Performers". The winner of the first award in the nomination "Guitar"
- «Jazz'n Goa» 2012, India. He played together with Arvind Haldipur and Praveen – the special guests of the festival.
- "The April branches" 2012, the international competition of V. Molotkov, Kiev - the first place in the nomination "Jazz")
- “The Nightless Nights” (rus. “Beliye Nochy”) 2011, St. Petersburg (Kevin Costner, Woody Alain were the festival headliners)
- «Just Jazz» 2011, Velikiy Novgorod (V. Ponomarev, A. Kuznetsov were the participants of a festival)
- “The Fall Marathon” 2010 (D. Goloschyokin, V. Feertag, G. Golstein were in jury)
- “Petrojazz” 2008, St. Petersburg (A. Podymkin, A. Kondakov, A. Kuznetsov, A. Sipyagin)