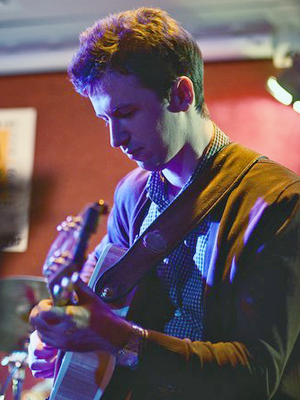 Maxim Shibin is young Russian guitarist, born in Potsdam (Germany). Started his musical career inspired by master-classes of remarkable jazz guitarist People’s artist of Russia Alexey Kuznetsov, who became a guide to the wide musical world for him.
In 2007 Maxim passed training in the USA according to the Open World program during which took part in the Lionel Hampton International Jazz Festival, he participated in a set of master classes.
In 2008 he won the 1st prize at the competition “Multifaced Guitar” and the 3rd one at the international competition NommeJazz in Estonia.
Now he is the constant member of an organ trio of Vladimir Nesterenko, Peter Vostokov’s orchestra, Alina Rostotskaya’s ensembles, and also cooperate with various Russian jazz musicians such as Alexey Kuznetsov, Vladimir Danilin, Alex Rostotsky, and many more.
Maxim performing style has been influenced by guitarists Herb Ellis, Joe Pass, Barney Kessel.