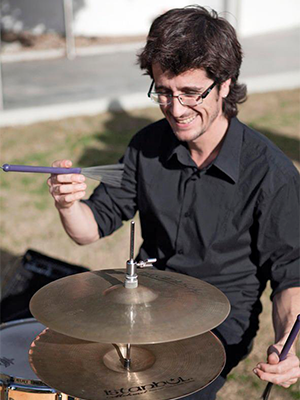 “I have studied in Musikene (top center of Basque Country’s music) for the speciality of battery of jazz and like a lot of styles of music like jazz, latin music, flamenco, Indian music, classic music and others.” – says Spanish Nacho Megina.

Has participated in fusion of Eastern music and jazz, such as Istanbul or Mundowaflar group (with the latter recorded the Earth cd).

Other recordings: "Mistura" and "Jazz Qurtuba 2005" with the group Zitma and "Cultural Fusion 1 +1" with Nacho Megina Quartet

With Danza Mobile Company has performed live for the shows El Paseo de Buster Keaton and Maloficio. He was also a music teacher at school that the company has in Seville.

Since 2009 he teaches drums and combo in the Jazz Workshop at the University of Seville.

View full version on Youtube channel
Nacho Megina Mart?nez (drums, Spain)
“I?m Nacho and I wish you be happy with the music, all music.”