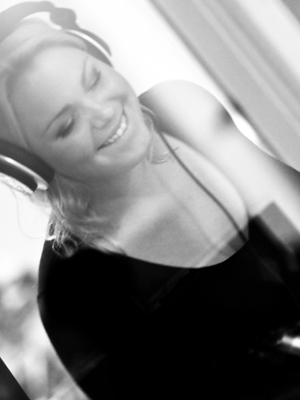 Viktorija Pilatovic is a jazz singer, arranger, composer.
In October 2012 Viktorija of just 23 years old performed her original composition “We Could Solve That” with internationally renowned bassist Victor Wooten as well as at the Berklee Yamaha All-Stars Concert with Abraham Laboriel, Perico Sambeat and Victor Mendoza.
Earlier this year, Viktorija found herself the only student invited to participate at the AEC Pop and Jazz Platform in Lille, France.
In March 2012, she found herself performing as a solo artist with PCC Sympho-Jazz orchestra conducted by the legendary John Clayton.
In July she performed at the Montreux Jazz Festival in Montreux, Switzerland.
Viktorija was born on the 12th of March in 1989 in Klaipeda, Lithuania. At the age of 6 she started playing classical piano.
In 2007, she began her Bachelor studies in Jazz Vocal at the Lithuanian Academy of Music and Theatre.
In 2008, the young artist performed at a festival in Naggar, Himachal Pradesh India hosted by the International Roerich Memorial Trust.
In 2010, Viktorija moved to The Netherlands to further her jazz studies at Prins Claus Conservatorium. Here her style evolved from traditional to contemporary jazz, fusing a number of styles and colors.
Viktorija took lessons from J.D. Walter, Ralph Peterson, Alex Sipiagin, David Berkman, Don Braden, Jeff Cascaro, Joris Teepe, Freddie Bryant, Gene Jackson and Robin Eubanks.
In 2011, Viktorija won 3rd prize at the Nederland Jazz Vocalisten Concours. The show was broadcasted on Radio 6 The Netherlands.
Also in 2011, Viktorija toured Athens, Greece with guitarist and vocalist – Adedeji Adetayo. Following the tour, she returned to Greece with her female jazz Group “The Sound Of Reflection”.
She now holds two bachelor’s degrees, one from the PCC and one from the LMTA and is currently studying for her Master's Degree in the Contemporary Studio Performance program at the Berklee College of Music, Valencia Campus on a full ride scholarship.
She is working on her debut album featuring original compositions and unique arrangement of jazz standards, fusing jazz, hip-hop and soul, with an expected release of late 2013.