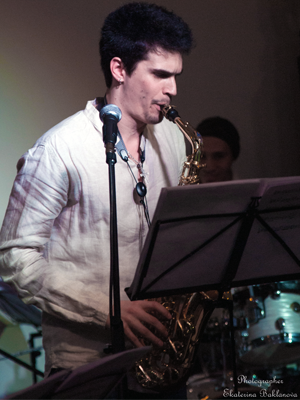 Alexey Leon Reyes is a jazz saxophonist born in Manzanillo, Cuba. During 2008-2013, he attended Alexander Oseichuk?s class in the Department of Modern Music of Gnesin Academy of Music. Since 2009, he played in Anatoly Krall?s big band.
In November 2010, he became a laureate of the Russian “Jazz XXI New Generation”. In 2012, he also became laureate of The VIII International Young Performers Jazz Competition in Rostov. In the same year, he represented the Russian Academy of Music at the BT River of Music Festival, playing in the Matthew Herbert Big Band the week before the Olympic Games in London. This event was organized by the British Council.
Alexey participated as member of both a jazz quintet and a big band in a workshop delivered by Herbie Hancock during the International Day of Jazz in Moscow.
In spring 2013, he received the Michel Camilo scholarship to attend the Masters program in Contemporary Studio Performance at Berklee Valencia, Spain, where he is currently studying with acclaimed performers and educators Perico Sambeat, Alain Perez and Victor Mendoza.
Alexey is currently working on his debut album, featuring original compositions and arrangements of Cuban standards that fuse Afro-Cuban rhythms and jazz, with an expected release in late 2014.


Alexey Leon Reyes (saxophone, Russia)
«I was born in Cuba to a Cuban-Russian family where everybody played some musical instrument, so from my early childhood I was exposed to different kinds of music.»