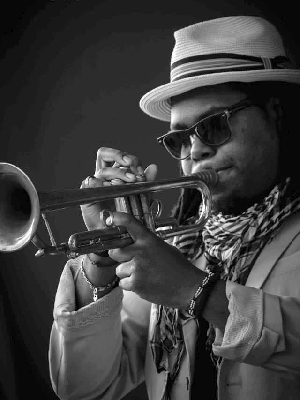 Alexis Baro is a three-time nominee for the Canadian National Jazz Award in the "Best Trumpet Player" category. He has begun playing trumpet at early age, later has graduated as a certified instructor from the renowned Amadeo Roland Music Institute in Havana. He relocated to Canada in 2001 and has since worked in a variety of genres including Jazz, R&B, Funk, Calypso and Latin.
He has performed and recorded as a member of the Canadian hard bop band "Kollage" for many years and was a featured soloist on Hilario Duran's Juno Award winning album "From The Heart".
Baro has also performed with a variety of artists such as Omara Portuondo, Tom Jones, David Foster, Dr. Lonnie Liston Smith, John Secada, Pacquito D'Riviera, The Temptations, Paul Shaffer, Hilario Duran, and many more.
As a solo artist he has three records: "Havana Banana", "From The Other Side" and his newest release "Blue Skin".
Baro has opened for Herbie Hancock at the Ottawa Jazz Festival, performed as a feature act at the Toronto Jazz Festival and the Montreal Jazz Festival and most recently performed at the Trinidad and Tobago International Jazz and Steelpan Festival, 2012 TD Toronto Jazz Festival and The Waterloo Jazz Festival.