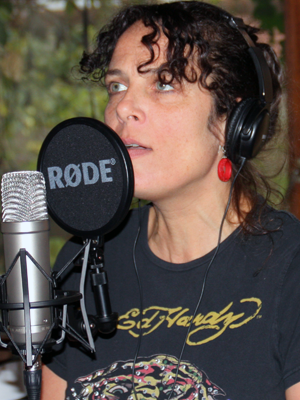 The UK | The USA, London

While Diana Rosa loves the art of composing that she’s developed over the past couple of decades, she has also realized that the freestyle improvisation she began her career with in her teens, is truly one of her main strengths with collaboration being another. The opportunity to create on-the-fly arrangements with top players, live on-stage, is therefore what has attracted her to the 2014 Master-Jam contest and concert series!\r\n\r\nAs a young singer in San Francisco, Diana graduated with honours from SF State University’s Centre for Experimental and Interdisciplinary Arts, where she focused on collaboration across the various artistic disciplines including music, dance, theatre, film and design. Immediately after graduating, at age 20, she enjoyed early success with experimental theatre company, George Coates Performance Works, with whom she toured the USA and Europe for several years, performing as an improvisational vocalist and movement artist amongst a cast of world class opera, gospel, and jazz singers. By age 21 she had attracted the attention of legendary jazz vocalist Bobby McFerrin who ed her from thousands of international auditioners to join his 12-member a capella voice ensemble “Voicestra”. This valuable experience taught her much about listening, the practice of improvisational “circle singing” and vocal improvisation in general.\r\n\r\nLater on she moved into pop and rock songwriting in band situations and worked in San Francisco, Los Angeles and New York as a signed recording artist with various labels from the independent (City of Tribes) to the mid-level (TK/Capitol distribution) and all the way up to the majors (Atlantic Records). She has written and recorded hundreds of songs in a variety of styles from heavy rock to delicate art songs but found that the mainstream music industry was not especially conducive to her creative expression. (An online archive of some of her released and un-released output may be found at unownedartist.bandcamp.com)\r\n\r\nAt the beginning of the 21st century she began collaborating with instrumentalists in Europe in crossover and world fusion styles, most notably German player of the Celtic harp, Rudiger Oppermann with whose Klangwelten festival she toured in 2003, later recording and writing with him and his long-time musical partners: Mongolian throat singer virtuoso Enkh Jargal and Indian tabla master Jatinder Thakur. \r\n\r\nShe moved from the USA to the UK of her birth in 2004 and remained there for nearly a decade, during which time she focused on developing her spoken word repertoire and music technology skills as well as teaching her “Adventures in Voice” improvisation workshop around Europe and performing as an experimental movement and vocal artist with Coincidence Theatre in Paris . Always a big appreciator of diverse musical styles, she has enjoyed collaborating with electronica musicians and DJs as well, freestyling over beats and pre-recorded harmonic structures. She has always been interested in controlling her own vocal signal processing from the stage which was considered quite eccentric when she started out and had to use digital delays and looping devices designed for guitarists or for use in the recording studio. But now, the culture and technology have caught up and she thoroughly appreciates the many electronic tools available to peforming vocalists today.\r\n\r\nShe now lives in the Alsace, France, at the Oppermann household, from which base she is developing several projects. Currently Diana is: working on a new collection of songs that defy easy categorization in collaboration with American poet Larry Beckett (famed for his 1960s and 70s collaborations with vocal genius Tim Buckley, father of equally talented singer Jeff Buckley) and supported by a diverse array of virtuosic players on various instruments including cello, double bass, piano, harp, percussion, guitar, and viola; developing solo works using digital delays, loopers, harmonizers, and other creative tools; songwriting with Italian down-tempo electronica producer Gold Lounge; and with jazz Duo Konrad-Rosa, recording and performing original arrangements of both classic and obscure songs, featuring bass player Mikhail Konrad. She also writes and performs her own original poetry and is working on a one-woman play.