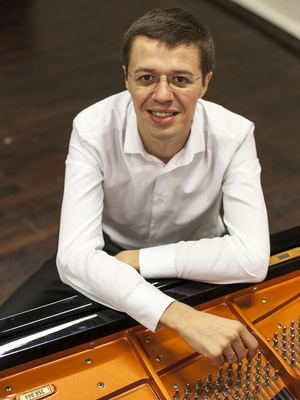 Dmitrij Golovanov is one of the most demanded jazz pianists in Lithuania. He is the winner of several international jazz piano competitions as well as the semifinalist of Montreux Jazz Solo Piano Competition in 2012 and a finalist of European Jazz Competition in Rotterdam in 2013. For the last decade he is an active participant of Lithuanian jazz scene collaborating with most prominent musicians. He graduated Lithuanian Academy for Music and studied in F. Mendelssohn-Bartholdy Music Conservatoire in Leipzig (Germany) with Richie Beirach. Dmitrij performs various music styles ranging from traditional, modern - creative, free jazz to classic/jazz crossover and experimental electronic music. His skills allowed him to become a member of several international and local groups with whom he performed in jazz concerts all over Europe, appeared on numerous CD’s as well as played in Europe's renowned jazz festivals such as London Jazz, Brugge Jazz, Pori Jazz and etc. Collaborations include trio VD, Jeff Cascaro, Jacob Riis, Byron Wallen, Eska Mtungwazi and many others.