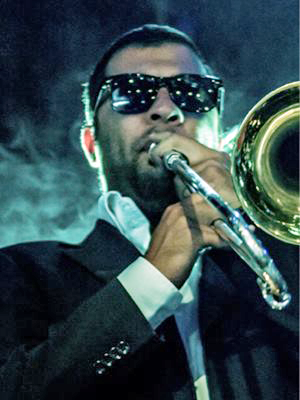 Born in Ankara, Turkey in 1989. After finishing his primary education, he was successfully accepted to further his studies at the Hacettepe University Ankara State Conservatory in 2000. Efe began his music education in the Classical Trombone Department, taking lessons from A. Bedii Durham. During this time, he participated in Classical Trombone, Jazz/Blues and Latin music workshops. Alongside his studies, At the age of 15 he already played with many classical orchestras/bands and performed as a trombonist in concert halls, theaters, clubs, and bars, covering all styles of music but concentrating primarily on jazz and improvisation.

In 2008, Efe became a part of the alumni of Bart van Lier and Ilja Reijngoud at Codarts Conservatory, Rotterdam. Since then, he has played at many festivals, featured on radio stations/TV channels, performed with festival and cultural organizations, composed/played on many albums/projects in Turkey, Holland, Germany, France, Italy, Spain, Luxembourg and Indonesia.

Efe says about his influences and aspirations: “Knowledge comes from always being open to improve one’s abilities while wanting to learn more. This statement describes my desire to continue learning with my passion for music. I grew up in a very dance and musically dynamic place with my parents both being traditional dancers. I realized from an early age that I did not choose music; music chose me! As a brass and colour solo instrumentalist (trombone, bass trumpet, synthesizer), I want to perform at more international events – examples - music markets/festivals corporate and private gigs. I would love to accompany more artists/DJ’s in an improvisation capacity and also a recording one. I want to expose my sound to a more mainstream audience across Europe and the US. On a personal level, I’d also like to create a name for myself as a solo performer playing my own dance/lounge productions with my trombone and trumpet as accompaniment. I have a catalogue of creations and now I’m just waiting for the opportunity to perform to a wider audience.”