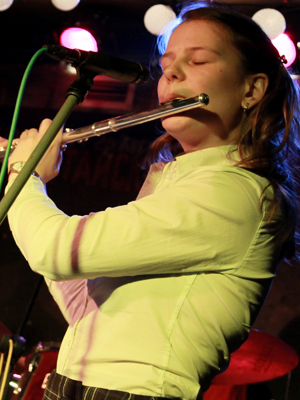 Katya saw flute for the first time, when she was 7. Since that time they are inseparable. She got nice classical education at musical school; she is a prize-winner of numerous whole-Russian competitions. Her passion to jazz started with big-bands: Nogin municipal orchestra, orchestra directed by Yu. Chugunov, then “Academic Band” directed by A. Kroll. She received jazz education as a saxophonist. From 2011 she is a leader of her own "Catherine's Project". "Catherine's project" is mostly flute jazz music, in which piccolo-flute sound and character are being revealed fuller: Latin jazz, swing, ballad, bossa-nova, bebop. The ensemble performs at many concert venues of the capital.


Ekaterina Katkova (flute, Russia)
Katya saw flute for the first time, when she was 7. Since that time they are inseparable.