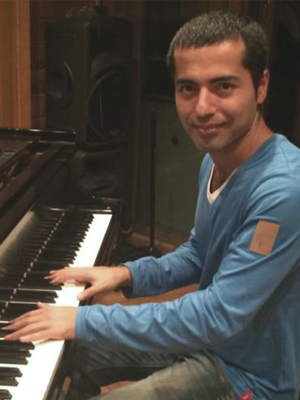 Born September 26, 1982 in Baku, Azerbaijan. He didn't attend any music school but took lessons from teachers such as jazz pianist Vagif Sadikhov, Aaron Goldberg, Kevin Hays,Yakov Okun.
To improve his technical skills he intensively analysed play of such musicians as Bill Evans, Herbie Hancock, Brad Mehldau...
In 2008 he has begun cooperation with Jazz Center in Baku. Year later he took part in the 6th Baku Drummer Festival. With Sevda Alekperzade band he played several concerts in Germany, France and Switzerland. Elchin was also part of the Rain Sultanov Quartet, with which he appeared on festival stages in Georgia, Azerbaijan and Malaysia. In 2010, 2011 and 2012 he gave performance on Baku Jazz Festival with his own band - Elchin Shirinov Trio. In 2012 he played concerts in France. In 2010 and 2013 he played at Voicingers Jazz Festival in Poland.In 2013 he Played tour in Poland with Jazz musicians from Poland w/Grzegorz Karnas, Michal Jaros, Sebastian Frankiewicz.
He played at Montreux Jazz Festival with Sevda Alekperzade.(2013)He played at JazzyColors Festival in Paris (Elchin Shirinov trio) (2013)