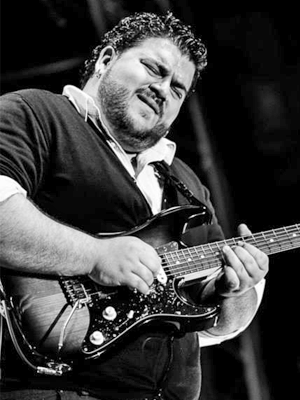 The guitarist, composer and producer Gabi Martinez, was born and raised in Zaragoza (Spain).From a young age he showed great musical interest. Influenced by his family (his grandfather was guitarist) he took the first spanish guitar lessons from this and after a brief period of classical learning of harmony and musical language, continued self-taught. He started playing guitar at age 8 and he bought his first electric guitar at age 12 .Shortly after, he received tutoring modern harmony, composition and performance, attempting to complete his musical studies . Most of these classes were taken in the form of seminars , for be modern music, hand prestigious international musicians as Alonso Martinez ( CSP Prof Jazz, "Harmony and Improvisation " and " The guitar in jazz and fusion " ), Robben Ford ( prestigious american guitarist "Jazz & Blues guitar" ), Francisco Simon ( guitarist of Red House "Introduction to Blues " ), John Parsons ( guitarist Miguel Rios, Luz Casal , ..., ), Paul Gilbert ( guitar held American professor GIT ), Jos? de Castro ( guitarist and producer of artists such as Melendi, Chenoa, ..., ), Pablo Padilla, Juan de la Oliva, Anye Bao or Angel Celada, among others.As instrumentalist with 18 years he recorded his first CD performed live with his band debut Averno . Subsequently, with 20 years , is called by Ideay Promotors for recording and touring with PerroZompopo ( Ramon Mejia , famous Nicaraguan singer, nominated for the Latin Grammys ) . Perform with this group, several concerts in Europe , in addition to recording the album " Romper el silencio ", where production are performed by Quique Mavilla ( Distrito14 , Amaral , Rulo and Contrabanda ). From there and he becomes part of several bands of this company as a session musician, like in alive. Since then he becomes part of several bands of this company both as a session musician, as a in live one.He starts with Karamba, recording some of the guitar from their second album, "Mirame." Since then, he becomes part of this band, performing several major concerts throughout Spain and Europe, sharing the stage with stars like of Habana Abierta, Septeto Santiagero, Ariel Rot and Calle 13 and giving his most popular concert at the VIVA AMERICA Festival in Madrid for about 500,000 people in what was the tour to promote the band's third album, "De ida y vuelta." An album disc with great reviews and nominations for several major awards from the music industry. The song "Vivir la vida" sounds in various advertising campaigns and appeared in several TV music channels as 40 Latino, MTV Spain and Sol Music.With the artist Fulanito de Tal (Roberto del Pino project, winner of the latest edition of Factor X in Spain) performs its self-titled debut album as a guitarist as well as a producer. This record shows shows a much mature and defined sound of guitars, a part of a more solid performance, consistent with the overall sound achieved by the band. He plays with the artist, in the direct of the tour. Where also working with the likes of Mariano Casanova ( Distrito 14 ), star of the film "Historia de un grupo de Rock" directed by Juanma Bajo-Ulloa and Vanito Brown , among others.Later, he creates Tinglao fusion band, instrumental fusion group , which he reflects his musical mixtures , with his fellow worker and friends Alexey Rodriguez " Ringo" , Frank Pino , Yamil Hernandez , Oscar Carreras and Gerardo Lopez. With this band of jazz -fusio, they have shared the stage with outstanding artists like Robben Ford,Esperanza Spalding, Bill Evans, The Earth Wind and Fire Experience, Christian Scott, Chris Dave, Jazzanova or Stanley Jordan among others. He recorded and produced " por encontrar m?s luz" their debut album . A disc that has a very large international presence, leading them to start a European tour for several countries like Germany, Holland, Lithuania (for exmaple ,Klaipeda Jazz Festival, for more tan 5000 people, where the show is broadcast live throughout the country by TV and where they share the stage with artists like Sheila Raye Charles, daughter of the legendary Ray Charles).From the teaching perspective, he teaches guitar and harmony from a actual point of view. He tries transmitting their knowledge, besides his experience over 12 years as in active professional guitarist. Besides this, he finished his studies as Electrical Engineer , thus achieving a much more specialized way, go into the world of electric guitar hardware. Also he focuses in an eminently practical teaching, giving another view to learning the instrument methodology, based on the sound and response of this, in addition to the traditional method .Besides doing several master classes at various centers on hardware, he is endorser of prestigious international brands (Shur, CAA, Providence, G-Lab, Rotosound) that sponsor and that is the image. He goes to play like an artist, to the NAMM show 2014, for this brands. He share space with artist as Scott Henderson, Michael Landau and Larry Carlton, for example.Now he combines his work as a live and session musician, producer and consultant team, with the teaching.