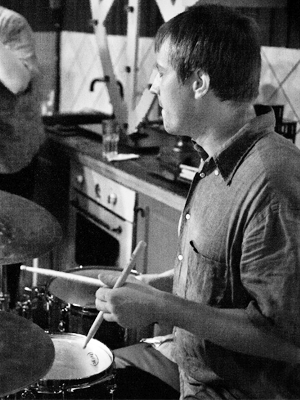 Maxim Kabalskis - a musician and a professor at the Rostov Art College. His professional career started in 1996.
He worked with such artists as Oleg Butman, David Goloshchekin, Robert Anchipolovsky, A. Kreuter, Jerry Bergonzi, Sascha Perez, Tecora Rogers, Deborah Davis, JD Walter, Steve Turre, Andromeda Turre, Bobby Martine, Karl Frierson, Victor boryl, A. Manukyan and others.
As part of the various groups, he participated in the jazz and rock festivals: ‘Kryl\'ia’ (Wings), ‘Nashestvie’ (Invasion), ‘Jazz at the Hermitage Garden’, ‘Jazz Province’, as well as online and TV programs: ‘Negoluboy ogonyok’, ‘Brat\' zhiv\'yom’, ‘Air’ on O2 TV.
He has been involved in a number of rock and hip-hop projects: ‘Cheboza’, ‘Fruktoviy kefir’, ‘Kasta’.
Played in an Ossetian orchestra of the State TV and Radio conducted by M. Kaboev.
As a percussionist of the orchestra of Garanyan participated in the Madrid XXIX Jazz Festival.
In 2008, through the Open World program, trained as an ambassador of peace at the Brubeck Institute, USA. He played in an ensemble with Bob Mintzer. Maxim is the member of the festival concerts and studio sessions of this program.
He currently still has an active concert schedule. At the moment he is recording the album for the personal project "The Goldberg Machine".


Maxim Kabalskis (drums, Russia)
Musician and a professor at the Rostov Art College.