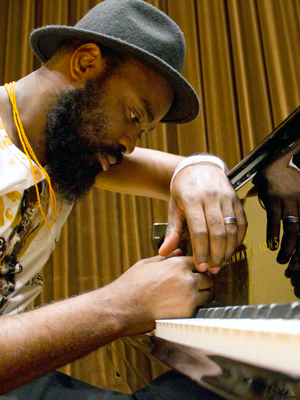 Growing up in the small town uMgungundlovu near Pietermaritzburg, KwaZulu Natal, Makhathini was surrounded by music as a child. Coming from a very musical family- his mother was a pianist and his father a guitarist- he was exposed to a range of music including traditional Zulu music. He recalls turning the knob on the radio until it reached the end, where he would listen to Indian music.

He was part of the choir at school and would sing at church, and until he was finished school, his voice was his instrument. It was only after High School that he started to study jazz piano. «I reached a point where my voice limited me from expressing the music, and that’s when I focused on the piano.’’

He feels his career has developed in what he describes as an organic process, starting with his upbringing and the influence of his mother being his first piano teacher. «Over the years I have learnt that if you submit yourself to the music or whatever your dream is then mother-nature has a way of taking care of the rest».

— ‘Sketches of Tomorrow’ • ‘Mother Tongue’: nominated for best jazz album at the 2015 SAMA’s

He is also 2015’s Standard Bank Young Artists For Jazz, a UKZN graduate and 1st recipient of the British Academy Newton Advanced Fellowship Masters Scholarship. Currently enrolled in Stellenbosch for his masters in music. He is also a lecturer at University of Fort Hare.

MAKHATHINI has played, toured and recorded with Busi Mhlongo, Zim Ngqawana, Feya Faku, Jimmy Dludlu, Herbie Tsaoeli and many others.

He has also produced some of the award winning and nominees albums such as: