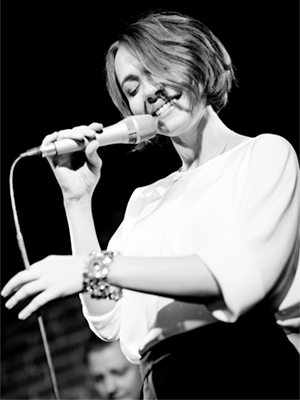 Jazz singer, Oksana Ferenchuk, was born in Rostov-on-Don in a musical family. Her early years she spent as a soloist in choirs and studying piano for eight intensive years. It was until she was 19 years old and was studying economics at the State University that she was really exposed to jazz by her future teacher and mentor, bassist Adam Teratzuyan. She starte her jazz career, singing with Teratzuyans’ jazz trio “HI-FLY” from 2002 to 2008, performing at such notable events as “Rostov Jazz” (Rostov-on-Don 2003-2004), “Jazz in Hermitage Garden” (Moscow 2006), “Jazz Province” (Lipezk, Kursk, Voronej 2006), “Volga Jazz” (Yaroslavl’ 2007), “Novoross Jazz” ( Novorossiysk 2008) as well as the international jazz festival ”Juan Le Pin” in Antibes, France (2006).
In 2011 after hearing Jazz Vocalist JD Walter perform in Rostov, she spent the next two summers in New York City studying vocals, theory and arranging with him, while attending the Rostov State Rakhmaninov Conservatory studying jazz. On her Second summer of studies in NYC, Walter produced Oksanas’ debut CD entitled “Little Bird”, with some of the finest Jazz musicians in NYC (Jim Ridl - piano, Freddie Bryant - guitar, Vince Ector - drums, Steve Varner - bass), consisting of self arranged standards and one original offering.
Now she is working on her second album.