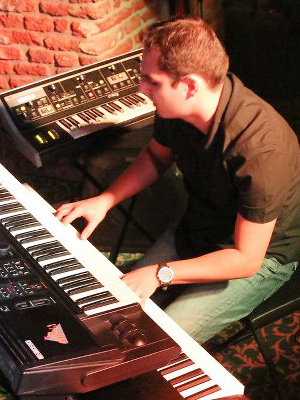 Teodor started playing the piano at the age of 4 by attending classical music lessons. He continued studying classical music until the age of 13, when he had the chance to move to a jazz-oriented piano studying class in "Francisc Hubic" Popular Art School in Oradea, Romania. He graduated from this program at the age of 17 with a perfect mark for the final exam.
He started playing in jazz and blues bands from the age of 15 being constantly involved in many youth-festivals, concerts and competitions, both in Romania and abroad. In 2004 he won the prize as the best pianist at "Iuliu Merca" memorial music competition, in Cluj-Napoca, Romania.
His main specialization is Computer Architecture, he has a bachelor degree in Computer Science from the Polytechnics University of Timisoara, Romania, and he studies to finish his PhD on "Advanced Testing Algorithms on Microprocessor Systems". His main occupation is IT Engineer at Continental Automotive Global company being an expert in IT Security and Networking topics.
His current project is JazzyBIT (started in November 2011), one of the best young jazz trios in Romania. Currently, they have been nominated as the best young debutant jazz band in Romania, for 2013 year, the Gala will be held in April 2014. They launched their first album "Touch the Sky" in February 2014; it contains 10 tracks entirely composed by them.