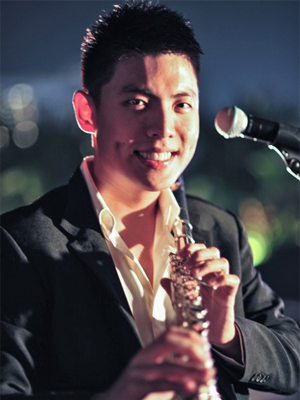 Rit Xu have enchanted local and overseas audiences at events such as the annual Chingay parade, the inaugural Youth Olympic Games, Spotlight Singapore at Cape Town and Bratislava, the Marina Bay Singapore Countdown Party and Grand Opening of the Marina Bay Sands. Currently at his third year of studies at the Yong Siew Toh Conservatory of Music, He was the first Southeast Asian to win the United States National Flute Association’s Jazz Masterclass Competition in 2011. In the same year, he was also awarded first prize in the Juniors Division at the Thailand International Jazz Conference Solo Competition. In 2013 he won a spot in the biannual United States Jazz Flute Big Band Competition and performed alongside jazz flute luminaries Hubert Laws and Jim Walker during the annual National Flute Convention at New Orleans.


Rit Xu (flute, Singapore)
He continues to hone his craft and will soon be releasing his debut album as a uniquely Singaporean jazz artist.