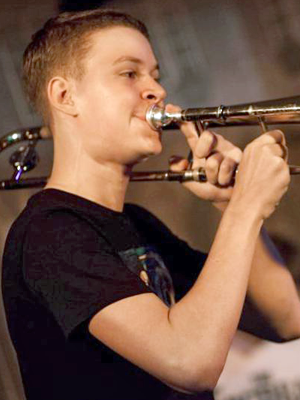 Vadim was born in Rostov-on-Don in 1997. He studies at Kim Nazaretov Jazz School. He is the winner of many contests. He plays in Andrey Machnev\'s Children Big Band, Munitipal Big Band named after Kim Nazaretov. Participated European festivals with orchestra, in 2013 took part in Rostov Jazz Festival with "East-West European" orchestra. Played with such great musicians as Wycliffe Gordon, Milan Svoboda, Marriane Solivan, Joris Teepe. He loves all musical styles, especially swing, hard-bop, funk. The main thing for Vadim is self-development in music and in life.


Vadim Smirnov (trombone, Russia)
The main thing for Vadim is self-development in music and in life.