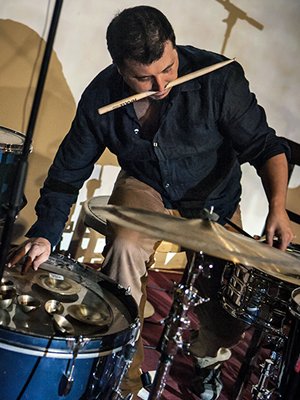 A drummer, percussionist and improviser born and bred in Barcelona, Vasco started playing drums at the age of nineteen. He has studied with teachers such as Aldo Caviglia and Jo Krause, yet he is mostly self-taught. Progressive rock and metal were his primary influences at the outset and from thereon in he developed interests in Indian music, African music, jazz and free improvisation. He has played a vast array of genres, from pop to death metal, jazz and everything in between. He also plays the tabla and works to integrate it into the drumset. Currently, he is very active in the free-improv scene, where he aims to apply non-conventional techniques to the kit. He has played around Europe with different projects and has released more than twenty records for labels such as Cuneiform Records, Altrock Records and Discordian Records, among others.