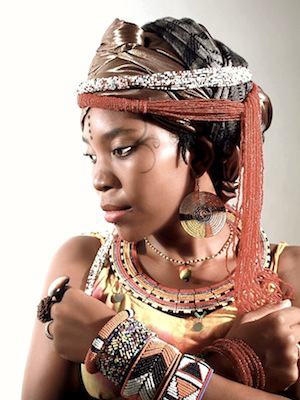 Music of Zambian born Yvonne Mwale has a strong message and a genuine cultural background. Powerful African rhythms uniquely fused with Jazz, Blues and Reggae excite the audience and media in the same way like her strong stage presence and this powerful, characteristic voice. Her latest album “Kalamatila” marked her debut as an solo artist and opened Yvonne Mwale the doors at radio stations all over the world.Everybody talking to Yvonne immediately realizes that the Zambian born songstress is everything else but a dreamer. After loosing both parents when only 12 she learned to survive on the streets of Lusaka, sleeping at night in the markets. It was the music and her discovery as a vocalist that changed her life to the good again. And it’s the same experience that today is talking in her music. Her lyrics are not empty phrases but contain strong messages that encourage, that tell about reality and together with the rhythms of her songs create a very unique positive energy. Yvonne Mwale says: “For me music is a way to tell about things I’ve experienced in life or have seen happening around me. At the same time my music gives a positive message. Hardships in life are supposed to make you just stronger.” Yvonne Mwale is for sure one of these strong women. Today, fans love her live performances for the energy she has on stage that inevitably transfers to the audience. Critics praise her for the contemporary deliverance of genuine African tunes that understand very well to fuse with that portion of Jazz and Blues.As her name grew in her home country, she was not only awarded “Best Upcoming Female Artist” at the national music awards but also won with her own band the CrossRoads Music Competition. That opened doors for her to extensively tour Europe. After returning she started recording her first solo album and then signed with the Danish independent label Caravan Records. This step has allowed her to keep her music freedom while reaching further to an international audience.Yvonne Mwale is currently on the road, touring both Africa and Europe and started recording her new album recently. The next album will be released in summer 2014.

Yvonne Mwale (vocals, Zambia/Germany)
“For me music is a way to tell about things I’ve experienced in life or have seen happening around me. “