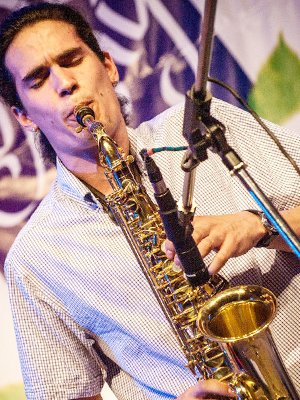 Russian saxophonist Alexey Leon Reyes was born in Cuba in the Cuban-Russian family, where everybody played some musical instrument, so from the early childhood he was exposed to different kinds of music.

He is an alumnus of Gnessin Russian Academy of Music, the class of professor Oseichuk. The winner of numerous international jazz contests.

As an invited soloist he took part in numerous concerts and festivals playing with such orchestras as the State Cinematography Orchestra, the Symphony Orchestra of the New Opera Theatre, and others.

He plays in the big band directed by legendary Anatoliy Krall.

View full version on Youtube channel
Alexey Leon Reyes (sax, Russia)
«I was born in Cuba to a Cuban-Russian family where everybody played some musical instrument, so from my early childhood I was exposed to different kinds of music.»