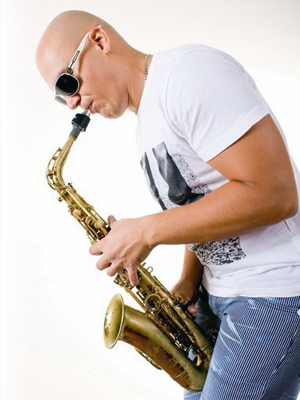 Andrey Mishakov is Odessa saxophone player. Initially Andrey learned to play piano and alt-saxophone. But later he changed the instrument to tenor and in 1994 he entered into the Sumy higher college of art and culture. Since his second year he has been taking part in republican contests of wind instruments performers (Dnepropetrovsk, Donetsk, Kherson), where he has won prizes.
In 1997 he got the diploma in nomination “The Best young musician of the 1997th year” in Sumy.
In 1998 he entered into the Odessa State Musical Academy named after Nezhdanova into the classical department, which finished with honor in 2003, and got the degree of the concert performer. Simultaneously he finished the magistracy with honor. In 2004 he was trained in France, city Frejus in the class of professor J.Melzer. Styles: modern jazz, fusion, swing, bop, tradition, jazz-rock, funk. Instruments: sax, alt, tenor, soprano.

Твитнуть
Нравится
Andrey Mishakov (sax, Ukraine)
In 2004 he was trained in France, city Frejus in the class of professor J.Melzer.