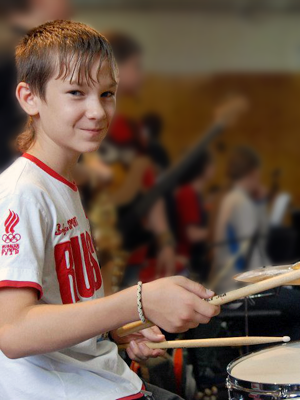 “ I’ve played the piano since I was 4,5 years old. When I was 7 I started playing drums and a trumpet, but the drums “won”. Now I’m playing in various ensembles and in the school orchestra held by Andrey Machnev. My drums teacher is Grigory Deratsuev.
I participated in the competition “Don Chento” in Kaliningrad, where I took the grand prix. In Sochy at “Jazz Step” I also took the gran prix. At the festival “Jazz Junior” in Rostov I took the first prize. Played at the festival “Novosadskijazz” as a part of an orchestra. I like such styles as modern jazz, fusion, latin-american music and traditional jazz.”