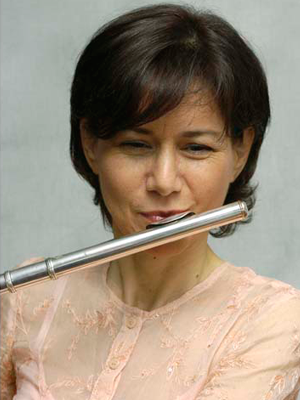 JAMIE BAUM, NYC jazz flutist/composer/recording artist/clinician has toured the US and over 30 countries working with renowned musicians ranging from George Russell, Randy Brecker, Donald Brown, Kenny Werner, Mick Goodrick, Tom Harrell and Fred Hersch to Dave Douglas, Uri Caine, Karaikudi Mani, Wadada Leo Smith and V. M. Bhatt. Ms. Baum has received critical praise for five CD's as a leader featuring her compositions with her most recent, Solace, on the Sunnyside Records label. She has two new recordings that will be coming out in 2013, one featuring her own compositions and the other the music of Jaki Byard.

Voted /1 Rising Star in the Flute category of the 2012 DownBeat Critics Poll, she has been nominated “Flutist of the Year “ in ’05, ’06, ‘09, ’10 and ’12 by the Jazz Journalists Association and "Flutist of the Year" in Brazil’s 2008 Jazz Station Poll. Among her many awards for composing are the 2010 CAP Award through the American Music Center and the 2003 New Works: Creation and Presentation Award and 2007 Encore Award, both components of the Doris Duke/CMA Jazz Ensembles Project. Ms. Baum was a US State Department/Kennedy Center Jazz Ambassador from ’99 –’03, touring extensively in South American and South Asia and has since had tours sponsored by U.S. Embassies in Nepal, Spain, India and Venezuela. She is on the faculty of the jazz department at the Manhattan School of Music and Berklee College of Music and has an endorsement with Altus Flutes.

Твитнуть
Нравится
Jamie Lynn Baum (flute, the USA)
Jamie Baum has toured the US and over 30 countries working with renowned musicians. She won a lot of awards for composing and as “Flutist of the Year “