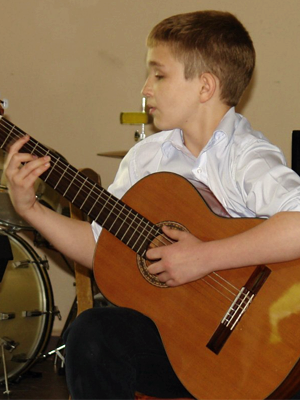 Konstantin was born on April 19, 2000 in Gorlovka, Donetsk region.
In 2007 he entered the Music school No. 1 in Gorlovka and studied saxophone and guitar at the of mainstream-jazz department.
Since September 2008 He’s the member of the child orchestra and ensemble of the pop-jazz department of the Music school No. 1.
Since 2010 he’s the member of the ensemble of the senior classes’ students.
During education at the music school he took part in:
1. The All-Ukrainian festival "Winter Jazz Meetings of E. Dergunov" (Kiev) (as a part of children's jazz ensemble in 2010, 2011, 2012);
2. Donetsk youth jazz music festival "Competition of young jazz performers" (as a member of two children's jazz ensembles in 2010, 2011, 2012);
3. The 2nd International children's festival "Playing the Jazz" in Rostov-on-Don, Russia (solo playing saxophone, as a part of children's jazz ensemble playing guitar, 2011)
He was a member of the orchestra and two jazz ensembles playing at the concert dedicated to the 15 anniversary of mainstream-jazz department of the Music School #1 and also in city and regional events.