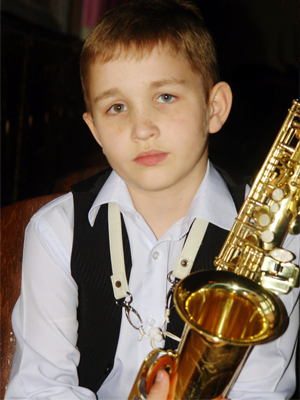 Konstantin was born on April 19, 2000 in Gorlovka, Donetsk region.
In 2007 he entered the Music school No. 1 in Gorlovka and studied saxophone and guitar at the mainstream-jazz department.
In February 2008 he took part in the regional competition "A Step to Olympus" for the first time.
Since September 2008 he is the member of the child orchestra and ensemble of the mainstream-jazz department of the Music school No. 1.
Since 2010 he’s the member of the ensemble of the senior classes’ students.
During education at the music school he took part in:
1. "Bakhmut Spring" competition in Artemovsk (1-st prize winner in 2009, 2010, 2011, 2012);
2. The All-Ukrainian festival "Tavria Surmi" in Melitopol (as a member of an orchestra, 2009);
3. The first All-Ukrainian competition on the best jazz performers among children and youth "JAZZ Zorі" Kiev (as a part of an orchestra, 2009);
4. The All-Ukrainian festival "Winter Jazz Meetings of E. Dergunov" (Kiev) (as a part of children's jazz ensemble in 2010, 2011, 2012);
5. Donetsk youth jazz music festival "Competition of young jazz performers" (as a part of two children's jazz ensembles in 2010, 2011, 2012);
6. Regional competition for pupils of initial specialized creative educational institutions “A Step to Olympus” (Grand Prix in 2010 and the 1st prize in 2012);
7. The regional competition of the pupils of the specialized education institutions’ primary classes of Donetsk region in Dzerzhinsk (Grand Prix in 2011, 2012);
8. The 4th Regional competition of wind and percussion instruments performers "Music Fountains of Donbas" in Donetsk (2nd place in 2011);
9. The 2nd International children's festival "Playing the Jazz" in Rostov-on-Don, Russia (solo playing saxophone, as a part of children's jazz ensemble playing guitar, 2011)
10. Entered the top ten solo with orchestra performers of the Open competition “Hope. Pride. Future” (Donetsk, 2012)
He was a member of the orchestra and two jazz ensembles playing at the concert dedicated to the 15 anniversary of mainstream-jazz department of the Music School #1 and also in city and regional events.