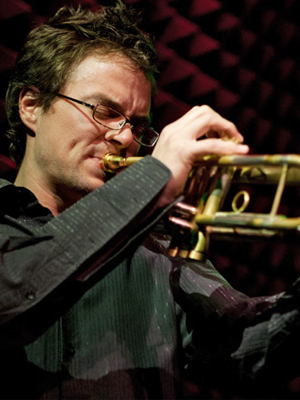 Trumpeter, composer and arranger Mark Rapp earned his Master’s in Jazz from the University of New Orleans continuing to live and play there for 5 years studying with piano Master Ellis Marsalis. Now based in NYC for 9 years, he's performed on and released 4 diverse recordings, which include leading and playing the closing track of Disney's "Everybody Wants to be a Cat" CD. Also featured on that CD are: Roy Hargrove, Dave Brubeck, Esperanza Spalding, The Bad Plus, Joshua Redman and more. Rapp's celebrated 2009 debut release "Token Tales" earned him a spot as a "Top Emerging Trumpeter" in Downbeat Magazine.

Mark has played sold out shows at the Blue Note (NY), Joe’s Pub, Yoshi’s (San Fran) and such venues as Blues Alley (D.C.), the JVC Newport Jazz Festival, Dizzy’s at Jazz Lincoln Center, JazzTime Festival (Croatia), Jazzland (Vienna), Jazz Standard (New York) and more. Mark was featured on a Travel Channel documentary and has played with such diverse artists as Branford Marsalis to Hootie and the Blowfish.

View full version on Youtube channel
Mark Rapp (trumpet, the USA)
Mark was featured on a Travel Channel documentary and has played with such diverse artists as Branford Marsalis to Hootie and the Blowfish.