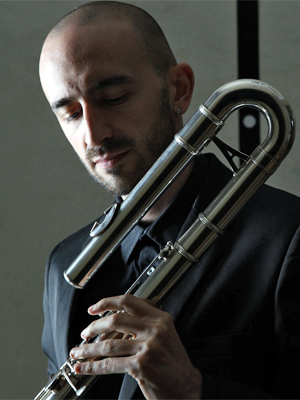 "Born in Domodossola (Italy) in 1980, he is one of the most highly regarded European jazz flutists and a flute and electronics specialist. He also plays in classical and contemporary contexts with the whole flute's family (from piccolo to bass flute).
He graduated in flute at the conservatory “G. Cantelli” of Novara and in jazz at the conservatory “G. Verdi” in Milan; moreover he specialized in jazz flute with further studies at the “Centre d’Information Musicales” in Paris with Bernard Duplaix.
He has played on tour in Italy, Switzerland, Germany, France, England and United States, in groups ranging from duos to big bands, orchestras and chamber music orchestras. He has made recordings for music programs for the Italian national channels Rai3 and Rete4. He has recorded both as a leader and as a sideman for Splasch Records, Dodicilune, Nu Bop Records and Schema Records.
He held flute's master classes in Europe and United States. He is the author of the Primers “Jazz Flute Training I&II” and “Jazz Flute Solos”. He contributes to the French quarterly “Traversi?res”, the official review of the French flute association and he is in charge of a column on the internet website Jazzitalia which is the most popular reference sites for flutists in Italy.
In November 2008 the prestigious association “Jean-Pierre Rampal” invited him as the only jazz flutist together with some of the best-known international classical flutists, to the “Convention de la Flute” in Paris where he held a master class and performed in a concert with his quartet.
In August 2009 he was awarded the prestigious “Premio Brusoni”in recognition of his concerts and teaching activities with the jazz flute.
In 2010 he was resident artist at the conservatory of Cholet (France).
In 2011 he creates “Just Flutes”, a revolutionary solo project involving flutes and electronics."

View full version on Youtube channel
Michele Gori (flute, Italy)
Michele is one of the most highly regarded European jazz flutists and a flute and electronics specialist.