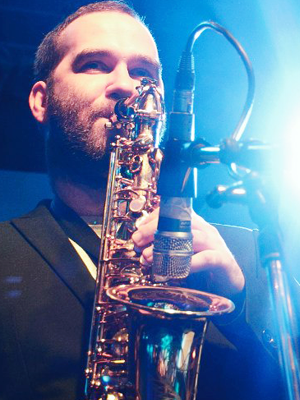 "Hello!
My name is Nikolay Moiseyenko. I’m a musician. My instrument is saxophone and I was fortunate enough to have my father as a teacher and later Alexander Oseychuk in Academy named by Gnesin. As I was always interested in jazz I always wanted to go to the motherland of jazz – the USA. In 2005 I entered into Berkley College of Music. I met a lot of musicians there, who influenced me a lot and changed my musical world outlook. I studied and played with such musicians as David Fiuczynski, Herb Pomeroy, Kenwood Dennard, Scoota Warner, Steve Jenkins, Meshell N'degeocello, Maria Schnaider, Marcus Miller, Louis Cato, Eric Legnini, Sam KIninger, Amy Bowles, Nikki Glaspie etc.
In 2008 I came back to Moscow and together with Lev Trofimov, Sergey Geyer, Aexey Kravtsov and Sergey Serov founded Nikolay Moiseenko Project.

http://www.facebook.com/nikolay.moiseenko.5
http://vk.com/nikolaymoiseenko
Твитнуть
Нравится
Nikolay Moiseyenko (sax, Russia)
«In Berkley College of Music I met a lot of musicians, who influenced me a lot and changed my musical world outlook.»