MJF on the UNESCO jazz map 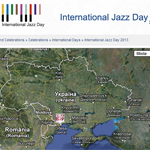 Odessa was one of the few “jazz” cities of the world, in which International Jazz Day established by UNESCO was celebrated for the first time in 2012

That time the celebration was initiated by author and general producer of “Odessa Jazz-Carnival” (from 2001 to 2010) Mikhail Freidlin and the founder, and permanent leader of jazz department of Odessa College of arts and culture named after K. Dankevich, Nikolay Goloshchapov. Just then the new project was started – the International festival-contest of jazz-improvisation skills “Master-Jam Fest” (MJF), which will be finalized on the 4-8 June in Odessa academic Russian theatre (Odessa, Ukraine). 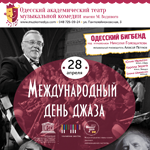 Today the celebration of Jazz Day, organized by “Master-Jam Fest” team together with N. Goloshchapov and Odessa academic music comedy theatre, is the only one in Ukraine on UNESCO map.

We would like to draw your attention to the fact, that only one city in Ukraine is marked by UNESCO and only our event in Odessa.
And in Russia – only St. Petersburg!
There are two Palmira’s on UNESCO map: the Southern and Northern ones…

Be our guests in Odessa academic music comedy theatre
on April, 28 at 7 PM!

From UNESCO documents concerning this decision:

30 April of each year would be dedicated to highlighting the joy that jazz can bring as a
unifying force. Jazz, as a tool for rapprochement, works… “International Jazz Day” would be a force for unity, dialogue and enhanced cooperation among people. It could be a rallying point with endless potential and possibilities. Many organizations currently engaged in promotion of jazz music will embrace the opportunity to foster greater appreciation not only for the music but also for the contribution it can make to build a better society…

Jazz works as an inclusive process by allowing each musician to develop a unique, individual
style. Improvisation and interpretation are essential components that help make jazz an everrenewing art form which continues attracting new generations. Jazz music is synonymous with freedom, both for its players that are free to invent and create each time they play a tune, and for its listeners.