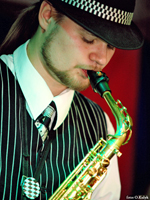 Lyubomir is a graduate-master of Lviv state musical academy named after M. Lysenko, ideological co-leader of groups "Dzyga Imagine" and "Green Silence" and also a member of numerous projects of jazz-rock-electronic genres. In the past he was a member of several projects and groups (“DNK”, “Sunrise”, “Roman Rak Big-band”, "Lu’co’mbo", bandsman of municipal orchestra of wind instruments and Lviv Big Band).